• Economies of EU gave themselves 40 years to gain competitiveness in technology, dairy and processed F&B products through CAP (common agricultural policy).
• According to the WTO, 80% of world trade among regions is merchandise trade that is, only 20% of world trade is in services. This closely matches the trade percentage that even US, which is ‘post-industrial’, achieves.
• According to the vision 2030 of Saudi Arabia, they are aggressively focusing towards tourism, private investments, creating conglomerates, manufacturing activities, health and quality life. This policy is expected to improve competitiveness in next decade.
• Manufacturing earnings and exports are stimulating economic prosperity, causing nations to increase focus on developing advanced manufacturing capabilities by investing in high-tech infrastructure and education.

India hasn’t signed any trade agreements in the past five years because of several factors. One of them is the relative lack of global competitiveness of its industry. Still, India is in negotiating mode in seven free trade agreements (FTAs) with countries such as Russia, Australia and Peru. It is expected that this could help in increasing market presence globally. The key lesson from free trade agreements (FTA) is they offer preferential access to the markets of other countries than is possible through the WTO framework. Big, medium, small, all countries are searching for such access across the world.

But the real question arises is, what do we have to offer even after signing FTAs, apart from trading at preferential rates? Does technical know-how get effected after signing any FTAs/PTAs? Or why are most of our FTAs dormant? The issue of what has been termed as the “de-industrialisation” of the developed world has been troubling academics and policy makers since at least the 1980s. The shift came in a majority of industrial economies because of low productivity growth and the emergence of new challenger nations such as Japan and Taiwan.

Economies of the EU gave themselves 40 years to gain competitiveness in technology, dairy and processed F&B products through CAP (Common Agricultural Policy). Over the past two decades, the emergence of China as a global manufacturing powerhouse has further challenged the existing manufacturing base within other countries. This raises concerns over whether or not it matters that an economy retains a manufacturing sector. A country can’t trade services for most of its goods. According to the WTO, 80% of world trade among regions is merchandise trade that is, only 20% of world trade is in services. This closely matches the trade percentages that even the US, allegedly after becoming “post-industrial,” achieves. If in the extreme case, an economy was composed only of services, then it would be very poor, because it couldn’t trade for goods; its currency would be worth very little. The dollar is also vulnerable in the long-term. A “post-industrial” economy is really a pre-industrial economy, that is, poor.

Now, Saudi Arabia is also trying to diversify its economy by reducing its dependence on oil and increasing the competitiveness in value added products. According to vision 2030 of Saudi Arabia, they are aggressively focusing on tourism, private investments, creating conglomerates, manufacturing activities, health and quality life. This policy is expected to provide competitiveness in next decade. Before achieving competitiveness, it seems little non-pragmatic to chase FTAs or any trade agreements. Saudi Arabia is one of the countries which has less numbers of trade agreement into force. They also want to give a buffer time to their domestic stakeholders like EU, Japan, South Korea, Australia and China gave it in past to attain competitiveness. 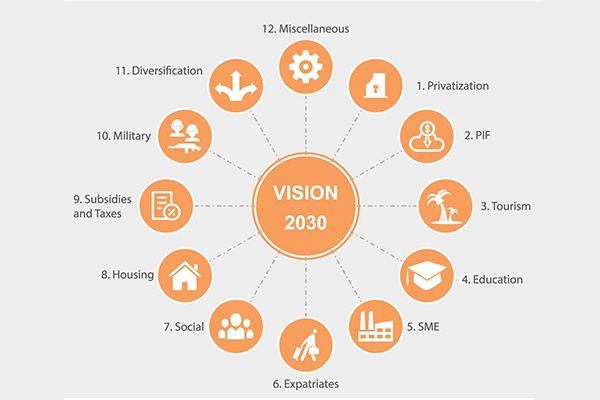 Coming to services now, services are mostly the act of using manufactured goods. We can’t export the experience of using something. From 2014, India hasn’t signed any trade agreement or rather has been procrastinating on ones which are in the middle of negotiations. Of course, the stalemate is mutual, but somewhere down the line India is able to offer little in terms of offerings. The expansion of markets gives rise to new businesses, so individual countries can earn more national revenue from business tax. Finally, trade agreements typically include investment guarantees, meaning investors, especially those from developed nations, can invest in developing countries with protection against political risk. India’s approach to negotiating FTAs has become focused on apparent ‘non-negotiables’ that have made its posture overtly defensive and unproductive.

Concern is rising over long delays in concluding a number of major agreements India is a part of. Foremost among these are India-EU, India-Australia, India-Russia, and India-GCC. For example, the European Union’s demand for lower import duties on automobiles and their components is being vociferously resisted by Indian industry, in turn forcing the government to stay firm on tariffs.

Manufacturing related activities among global nations are rapidly evolving. Historically, manufacturing earnings and exports are stimulating economic prosperity, causing nations to increase their focus on developing advanced manufacturing capabilities by investing in high-tech infrastructure and education. In fact, technology-intensive sectors dominate the global manufacturing landscape in most advanced economies and appear to offer a strong path to achieve or sustain manufacturing competitiveness.

Therefore, having a manufacturing base is imperative for country like India. To gain competitiveness in secondary sector, Indian policymakers need to give a buffer time or they need to invest time to built a platform for the secondary sector, which requires a different approach as compared to services. So, the vision that the India should focus on has to be strategic and should not eye short-term goals. Without investing time, it is tough to achieve competitiveness and offer various sectors on the trade negotiating table. Once that competitiveness is achieved, just as some of the most successful countries are done, Indian stakeholders will definitely be in a position to face the heat of competition. This bus has to be ridden without any apprehensions.

Enquiry for Competitiveness by strategic design