India-Denmark Green Strategic Partnership (GSP) aims to build on the existing linkages to tackle the daunting challenge of Climate Change and deliver on Sustainable Development Goals. It has the potential to accelerate the march towards a low carbon future in India and other developing countries. 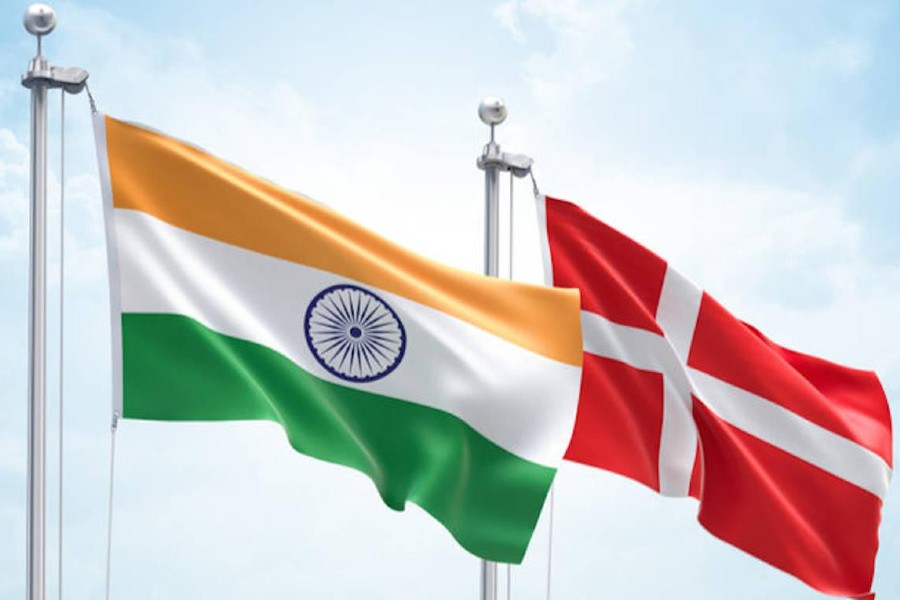 The India-Denmark bilateral economic relationship of around 400 years was accorded GSP status during the virtual Leaders’ Summit on September 28, 2020. A catalytic pathway appears to be the 2009 Joint Commission for Cooperation Pact. The pact resulted in joint Working Groups on a range of sectors such as renewable energy, urban development, environment, agriculture, food processing, science, technology and innovation, shipping, labour mobility and digitalization etc.

India-Denmark GSP aims to build on the existing linkages to tackle the daunting challenge of Climate Change and deliver on Sustainable Development Goals. In this context, the visit of the Danish Prime Minister was a significant milestone as it came right after a year of the 2020 Summit, and right before Glasgow Climate Conference in October-November 2021. Measures such as India-Denmark Joint Action Plan for 2021-26 have also been put in place for implementation of the GSP. High level political exchanges are further expected, including at the India-Nordic Summit in Copenhagen in 2022.

The two countries could now strive to build on a few focus areas to maximise sustainability gains for India and other developing countries.

Denmark has set an ambitious goal of reducing greenhouse gas emissions to 70% by 2030 compared to 1990 and achieve carbon neutrality by 2050. On the other hand, India has set the target to achieve carbon neutrality by 2070, and announced a 2030 transition pathway. The pathway strives to increase non-fossil fuel based energy capacity to 500 GW, meet 50% of the country’s energy requirements from renewable sources, reduce 1 billion tonnes of projected carbon emissions, and cut carbon intensity of the economy below 45%.

India’s position at Glasgow Climate Conference is in line with the ‘Common but Differentiated Responsibilities and Respective Capabilities’ principle of the Paris Agreement. But having underlined the ambitious 2030 goals, India seems to be leading the way for developing countries.

India and Denmark could foster closer global cooperation to mobilise the required skills, technology, climate finance and adaptation support. A joint India-Denmark Centre of Excellence for Offshore Wind and Renewable Energy (CoE) has been launched in New Delhi on September 09, 2021. This could accelerate the resource mobilisation as well as renewable energy investments from the European Union and Nordic countries, among others. The CoE’s role will be vital, particularly in view of India’s 30 GW offshore wind energy target by 2030 along its 7,600 km coastline.

India and Denmark could steer scalable collaborations to build offshore wind and floating solar farms along India’s territorial waters and exclusive economic zones. They could even underpin such a renewable energy transition for Small Island Developing States and developing countries in the Indo-Pacific region.

For greater techno-commercial and financial viability of renewable energy projects in India and other developing countries, it will be useful to localise global best practices. Rewa Solar project in India, for example, could provide the basis for effective project planning and implementation at scale with competitive tariffs and greater environmental, social, and governance impact.

India and Denmark coordinate on global issues at various regional and multilateral formats including on the margins of United Nations General Assembly and Asia-Europe Meeting. India’s outreach to Nordic countries of Denmark, Finland, Iceland, Norway and Sweden in the form of India- Nordic Summit focuses on global issues of security, economic growth, innovation and climate change.

India-Denmark GSP also resonates with resolutions of the first India- Nordic Summit that took place in Stockholm on April 17, 2018. The two countries have also agreed to take steps under EU Strategy on the Indo-Pacific and India-EU Connectivity Partnership.

Except Norway and Iceland, other Nordic countries including Denmark, with- or without Euro as their national currency, are members of the European Union. But all Nordic countries belong to the Schengen area. The area is the world’s largest visa free zone enabling free and unrestricted movement of people within and beyond Europe with common judicial and police cooperation system.

Moreover, the EU is India’s third largest trading partner with expanding investment linkages. Timely progress on a potential India-EU trade pact, as well as separate negotiations on investment protection and geographical indications will tremendously boost trade and market access linkages in the context of India-EU, in general, and India-Denmark, in particular.

India-Denmark bilateral trade in goods and services was US$ 3.58 billion in 2020, where trade in services was US$ 2.32 billion. Denmark and India are usually at advantage in services and goods trade, respectively. Danish companies in India are more than twice in number as compared to Indian companies in Denmark. They represent transport & logistics, water, waste to wealth, waste to energy, agriculture & food processing, renewable energy, innovation and digital transformation and clean technology sectors.

Freddy Svane, Ambassador of Denmark in India in a recent interview reflected as in how Danish companies are transforming India’s economic and development landscape. India-Denmark innovation and digital transformation partnerships are deepening too. For example, supply chain digitalisation in India in both domestic and cross border contexts is assisted by a Danish company  – Maersk.

On the other hand, Indian companies in Denmark are also building greater economic, innovation and people-to-people linkages. A recent partnership between Infosys Technologies and Aarhus University to establish a Denmark-based Centre of Excellence for Sustainability Solutions for India is an example. Similarly, there is an Urban Living Lab in Goa for sustainable and smart cities, while efforts for framing Indo-Danish Water Technology Alliance, among others, are taking shape.

Similarly, India and other developing countries need to build domestic capacities to adapt to developed countries’ emission reporting requirements from imports and consumption. For example, Denmark’s climate goals enshrined in its 2020 Climate Law are subject to annual parliamentary review, and include a provision for such reporting. Similarly, Denmark’s global engagement guidelines on climate change and climate finance have also been stipulated.

In view of that as well as broader European Green Deal, among others, closer global cooperation on capacity building and mobilising climate finance for green transition in developing countries will be needed. India has the potential to become a knowledge and capacity building hub, and underpin rapid green transitions in developing countries in its neighbourhood and elsewhere.

India and Denmark could therefore strive to synergise, leverage and deepen institutional linkages with the EU, Nordic and other likeminded countries. The Green Strategic Partnership could then help accelerate green economic transition in India and other developing countries, effectively.