Brazil has shown a relatively faster revival in its manufacturing sector led by a strong government stimulus to boost local employment, consumer demand and industrial growth. But will this eventually prove to be a successful post-pandemic recovery strategy? 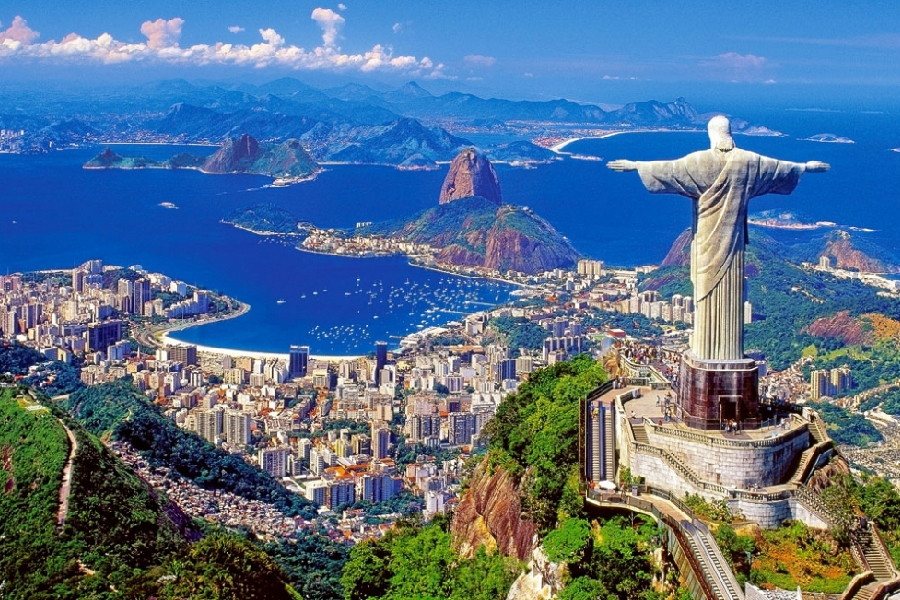 Brazil is among the severely affected countries by COVID pandemic with around 5.7 million cases and 0.16 million deaths. However, in spite of the severe impact, the industry has recovered relatively better as compared to other major economies. Brazil’s manufacturing purchasing manager index (PMI) released by IHS Markit was recorded at 66.7 in October 2020 and has been in expansion mode since June this year.

The increase is on the back of rise in export sales and production in the country. Since the index value is above 50, it shows a significant expansion in Brazil’s manufacturing sector. However, input prices also rose due to currency devaluation and constraints in the supply chain, which strained profitability. 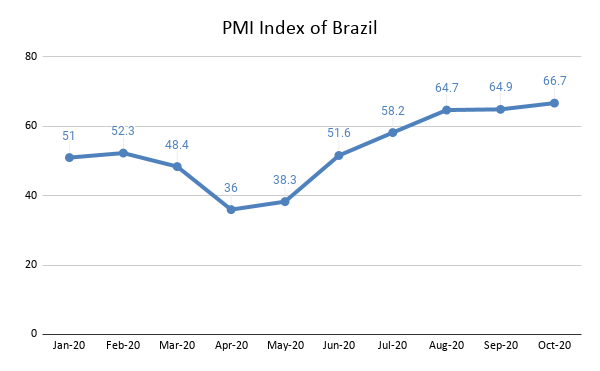 The IHS Market survey also found that the employment numbers have improved significantly. The index for employment rose to 58.2 from 56.5 implying opening up of new jobs. This has also boosted expectations for increase in consumption. 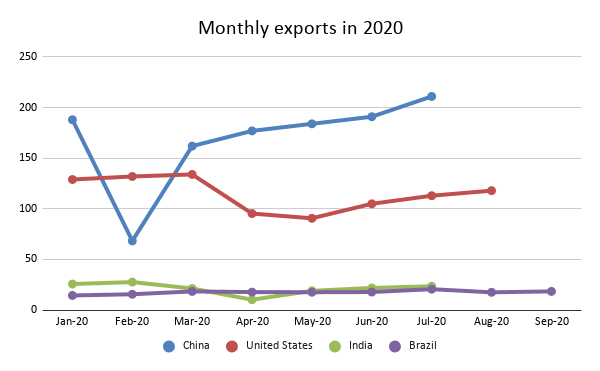 Source: Observatory of Economic Complexity (OEC), figures in US$ billion for the period January 2020-September 2020

Focusing on exports, Brazil’s performance has remained less volatile between January and September 2020 in comparison to countries like China, US and India. The impact of COVID-19 has been specifically seen on some sectors including manufactured goods. There has been a decrease in the number of countries where Brazil exports its goods. However, the blow on exports has been softened by commodities, thus showing their resilience. The impact on imports of Brazil has also been small with reduction in imports by 5.21% in first half of 2020 with an approximately equal split among top three source countries for Brazil’s imports: United States, China and European Union. 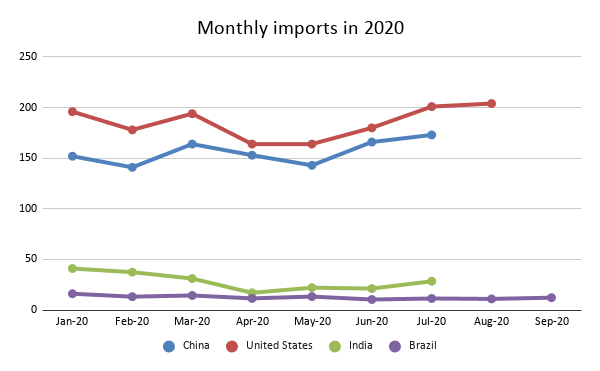 Source: Observatory of Economic Complexity (OEC), figures in US$ billion for the period January 2020-September 2020

One measure that has helped the economy pick up momentum is the strong fiscal stimulus introduced by the Brazilian government. The government has introduced fiscal packages worth 12% of the country’s GDP to pull the economy out of the COVID slowdown, on similar lines as Latin American peers like Chile, Peru and Argentina. The stimulus focused on the support to households in the form of cash transfers; support to businesses through expansion of the public banks’ credit lines, supporting working capital, and credit support to MSMEs. Also, spending on the health sector and aid to the states has also been included in the fiscal package. The central bank has also cut the interest rate to a record low of 2% with the purpose being to keep the cost of borrowing at a low level. HE Mr André Aranha Corrêa do Lago, Ambassador of Brazil to India, comments:

Estimates for GDP, as expected, are still of a 5% contraction in 2020, approximately. The impact – less severe than that forecast for many G20 economies – would have been even greater, were it not for the countercyclical measures adopted by the Brazilian Government, including Emergency Aid cash transfers; federal transfers to local authorities for improvements in health services; the Emergency Credit Access Program and the National Support Program for Micro and Small Enterprises. These measures should mitigate the severity of the recession and preserve the financial integrity of businesses and families, setting a basis for recovery.

The large spending has helped the Brazilian government prevent its economy from a more severe downturn. The income support by the government, especially to poor families with inclusion of 1.2 million additional families under the Bolsa Familia programme, has provided almost US$ 110 per month to 30% of the population. Jahangir Aziz, Chief Emerging Markets Economist at JP Morgan, opines that the public spending has contributed significantly in offsetting the fall in private demand in Brazil. Given that the COVID infection rate in the second quarter was similar for both Brazil and India, the contraction in GDP growth in the former was half of that in India.

Furthermore, Aziz said that in the absence of appropriate income support to households and firms, the Indian economy is expected to go into a financial crisis and affect the medium term growth. Thus, India can learn from Brazil by providing support to the households and firms. IMF opines that there is more room for fiscal stimulus in India. Malhar Shyam Nabar, Division Chief, Research department at IMF, said that Indian government requires to tilt its fiscal policy more toward direct spending.

However, increasing the deficit due to large fiscal stimulus is putting the fiscal credibility of the economy at risk. In July 2020, the debt to GDP ratio for Brazil was 86.5%. As a result of the large spending, one fear is that it may result in increasing inflation which would push the elevating charges. The impact of this fear has already affected the market with a larger fall in Brazil’s Ibovespa index by 15% in year 2020 up to October in comparison to Mexico (down by 12.5%) and India (down by 1%).

Still, some economists have argued for direct cash transfer or tax cut as fiscal support. One way to allow for the direct support is to look for subsidies which are wasteful and invest that cash in direct fiscal support, says Gita Gopinath, IMF’s Chief economist. The direct fiscal support will allow people to purchase essentials, be it food or clothes, in these unprecedented times, and help revive demand.

In a crisis where the length of recovery curve is uncertain, however, the major risk is how to bring the economy back to spending prudence, once the fiscal burden becomes too difficult to bear. On the other hand, an early recovery through a relatively unscathed manufacturing sector can also be advantageous to economic and trade growth in the post-pandemic period. This is where the success of the response of Brazil and other Latin American countries will be tested in the coming months.

Enquiry for Brazil economy – early riser in the post-pandemic race?