• Exports of Basmati rice from India are expected to grow to a record high of Rs 30,000 crore in 2018-19.
• This export performance has been achieved despite several challenges including pesticide issues in EU and Saudi Arabia and payment issues with Iran.
• Improvement in average realisations and increasing paddy prices have been critical factors driving growth.
• However, prospects of peaking prices and overdependence on a few markets could pose challenges for exporters in the coming fiscal.

India’s basmati rice exports are expected to reach a record high of Rs 30,000 crore in 2018-19, overcoming the previous peak of Rs 29,300 crore in 2013-14, according to a report by ICRA. Key factors driving the growth are strong demand from Iran, improvement in average realisations and consecutively increasing prices of paddy over the last three years. Exports reached Rs 24,919 crore (3.37 million MT) in the first 10 months of 2018-19, growing by 17% yoy. Average export realisations increased by 14% over the previous fiscal year, due to increase in paddy prices and rupee depreciation vis-à-vis the US dollar. Ironically, the fear of US sanctions also prompted aggressive buying by Iran in the first half. Basmati rice is expected to continue its growth momentum in 2019-20, with a projected growth of 4-5% yoy.

In the current fiscal, production has come down by around 5% as some of the farmers shifted to non-basmati due to significant increase in its MSP. The increase in prices could continue upto the first half of FY 2020.

Basmati rice exporters faced a number of challenges during the year, prominent among them being planned adoption of strict pesticide rules by Saudi Arabia, the pesticide residue issue in the EU, payment problems with some Iranian importers and imposition of trade sanctions on Iran by the US.

European Commission had reduced the maximum mandated levels of Tricyclazole to 0.01 parts per million (ppm) as compared to 1 ppm from January 1, 2018. This is prominently used by farmers in PB1 and Pusa 1401, the Basmati rice varieties that have the maximum share in exports to the EU. The loss owing to EU pesticide rules was estimated at Rs 1,000 crore during the first nine months of FY 2018-19, as exports declined by 60% to reach 1.62 lakh tonnes during the period. Despite India’s request to permit a phased reduction of the pesticide over three years, authorities in the EU have been stringent on their position.

Last year, Indian rice exporters had nearly Rs 1,000 crore stuck in Iran, primarily due to a default by an Iranian importer. In December 2018, India signed an MoU with Iran, wherein the latter agreed to accept payments in rupees. According to the arrangement, domestic oil refiners make their payments to Iran via a UCO Bank account of the National Iranian Oil Co. Iran then uses this money to pay for imports from India like medicines, medical devices and food grains.

The loss in the EU market was compensated to some extent by Middle Eastern countries. The issues with Saudi Arabia also seem to have been sorted out, and the institution of the rupee payment mechanism between India and Iran should facilitate trade in the future. 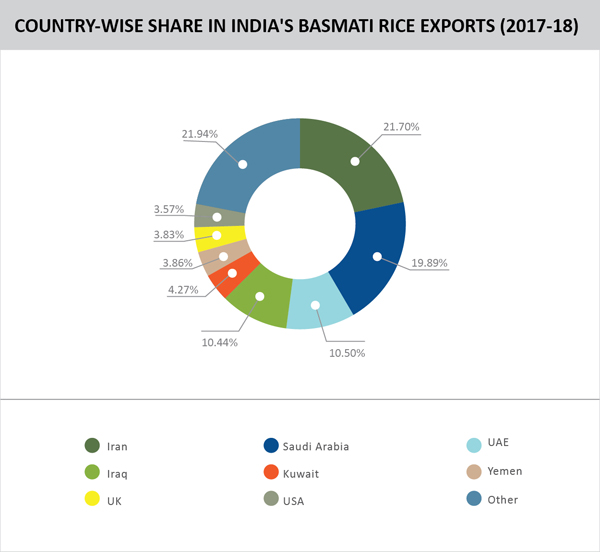 However, Indian basmati rice exports remain heavily reliant on a few markets. In 2017-18, Iran and Saudi Arabia accounted for over 40% of the exports of basmati rice from India by value. During April-February, 2018-19, Iran took nearly 1/3rd of the share of exports.

Indian exporters are exploring some other markets including China, US and Latin America, but the response is not so significant. China is considered to be a highly lucrative market, which imports around 5 MT of rice annually. As of October 2018, Chinese authorities had cleared 24 rice mills in India for exports of non-basmati rice. Around 400-500 tonnes of Indian non-basmati rice has been exported to China so far. But the market would take some time to mature, and essentially imports non-basmati rice at present.

Given that diversification in the export basket won’t come so quickly, basmati rice exporters who are carrying inventory face a significant risk of overdependence on a few markets. They need to be careful, as prices of the commodity also appear to be peaking, according to experts.