• Australia’s exports to India, signify years of missed opportunities, and are dominated by mineral fuels and education services.
• In terms of FDI equity inflows to India since the turn of this century, Australia ranks a low 24
• Australian government and business are now accepting the fact that they can no longer afford to miss the opportunities offered by the world’s fastest growing major economy.
• A report submitted to the Australian government sets a vision for making India among Australia’s top three markets by 2035.

When we think of India-Australia trade relations, the most visible export from the land of kangaroos that comes to mind would obviously be top cricketers like Steve Smith, David Warner, Shane Watson and Nathan Coulter-Nile, during the IPL season.

But both sides would have reason to believe that there is much more to the exchange beyond curry, cricket and Commonwealth. India and Australia are part of ongoing negotiations for the Regional Comprehensive Economic Partnership Agreement along with China, Japan, South Korea, New Zealand and Southeast Asian nations. Once successfully completed, it will encompass countries accounting for around half of global GDP and will therefore be the largest trade deal after the WTO itself.

In actual terms of trade, Australia’s merchandise exports to India reached US$ 11.37 billion during April-January, 2018-19, but these are overwhelmingly dominated by fossil fuels at US$ 8.26 billion. Even in terms of total FDI equity inflows into India from April 2000 to December 2018, Australia ranks a low 24, with inflows of US$ 928.23 million.

On the other hand, Australia’s appeal to Indians has only got better over the years in one key arena – education. In a report on Australia’s services trade with India, the Department of Foreign Affairs & Trade (DFAT), Government of Australia, estimates services exports to India at US$ 3.5 billion in 2016, growing at a CAGR of 13.6% since 1999. Education-related travel services (education fees and living expenditure of Indian students in Australia) accounted for around 74.1% of this figure.

Highlighting this huge anomaly and several years of lost opportunity, Mr Peter Varghese, former secretary, DFAT asked Australian entrepreneurs to embrace India’s ‘chaos and diversity’ at the recently held Australia-India Youth Dialogue. He stated, “There is no other single market in the world that has more growth opportunities for Australia than India… So if you work backwards from that headline, the question is, how do we best position ourselves strategically?”

For Varghese, the 700,000 Indians who are now Australian citizens are a good start, as they could prove to be an important link between the two countries. The Australian government asked him to prepare a report with a strategy to improve Australia-India business relations. India is currently Australia’s 4th largest trading partner, with trade at US$ 29 billion after China (US$ 195 billion), Japan (US$ 78 billion), the US (US$ 70 billion) and South Korea (US$ 52 billion).

Varghese’s report sets a target of making India one of the top 3 export markets for Australia by 2035. It attributes the current situation to the general approach of Australian businesses that have put India in the ‘too hard’ basket. But now they cannot afford to miss the opportunities in the world’s fastest growing large economy.

It admits that Australians have been dated in their perceptions of the business environment in India, where a number of significant positive changes are taking place. These are often invisible to the naked eye; for instance, trade is around 40% of India’s GDP today, as compared to 13% in 1990. Even the average applied tariff is one-tenth of its value in 1990. India is not the next ‘China’

Having said that, the report emphasises on the importance of viewing India on its own merits, rather than making comparisons with China and economies in East Asia. It is unlikely that India will be able to catch up with China in the coming decades in terms of absolute economic size.

But the report makes it a point to mention a number of positive and structurally sustainable growth drivers that propel the India growth story. These include urbanisation of the world’s largest rural population; gradual transformation of the informal economy that accounts for 90% of India’s workers; a young demographic with a mean age of 27; considerable investment in infrastructure, and the beginnings of an ambitious program to upskill 400 million Indians.

Taking a conservative view, the report estimates a growth rate of 6-8% till 2035, assuming that there are no radical structural reforms. Even in this scenario, India is projected to be the world’s third largest economy by that year after US and China.

Overall, the report cites three reasons for Australia to focus on India for exports and investment – complementarity, scale of India’s economy and the need for Australia to diversify its global risk. Moreover, it recognises shared interests of both countries in an environment where the decline of US dominance is juxtaposed with the rising ambitions of China; the rules-based international order is increasingly under threat and there is a growing urgency to build regional institutions to promote integration in the Indo-Pacific region. 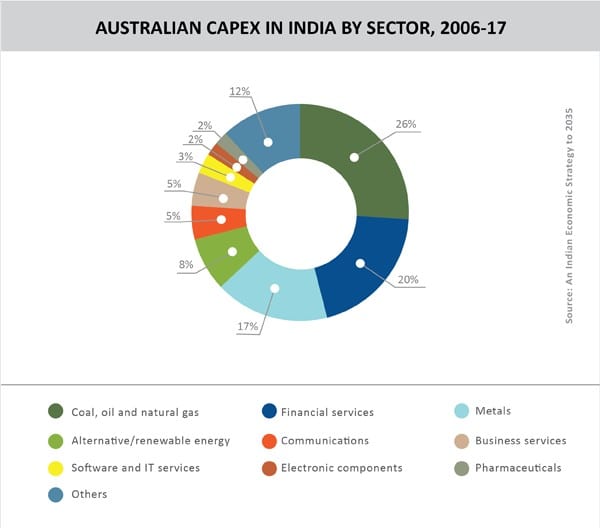 Need for a nuanced approach

Education remains a key sector due to the demand-supply gap in India. Going forward, Australia would like to diversify on areas like post-graduate and research collaboration, cost-effective vocational education and digital delivery. In the lead sectors, Australia believes it has the potential to be among the top five providers. The promising sectors are those where Australia sees a role as a niche player in the Indian market.

In terms of investment opportunities, the report recognises India’s relative openness to FDI, familiarity of institutions (due to shared history) and understanding of the English language as key advantages for Australian businesses to take the relationship to the next level. It expects the policy to be even more conducive in the next 20 years, and opines that Australian pension funds and infrastructure finance companies can explore strong growth potential in the coming years.