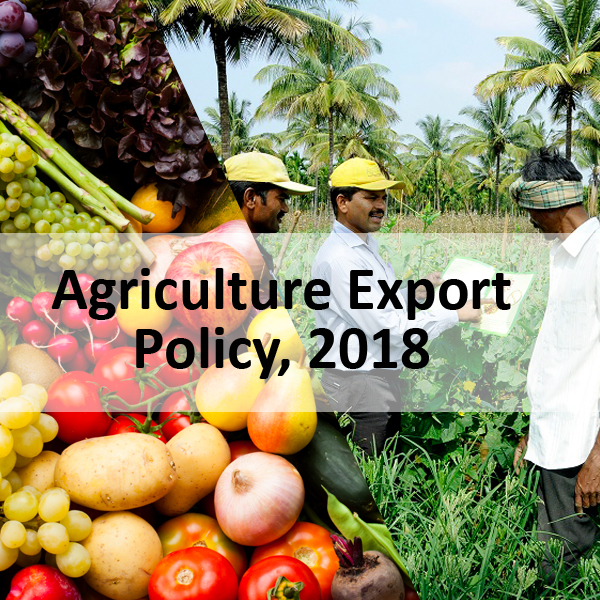 India’s agri-export so far has been a story of untapped potential. India is second in global agricultural production, but its share of world agricultural exports is as low as 2%. Agricultural exports’ contribution to India’s GDP is also as low as 2%, lower than other developing agrarian country. Brazil and Indonesia, for example, the 3rd and 6th respectively in terms of world agri-exports contributed 4% each to their respective GDPs and Argentina, 7th in world agro-export ranking, as per 2016 figures, contributed 7% to its GDP.

Why is it so? India’s GDP was the highest in 2016, totaling US$ 2264 bn while the GDP of Brazil and Indonesia was US$ 1796 and 932 respectively and that of Argentina was US$546 bn. Can this situation be attributed to the presence of several more important contributors to India’s GDP than mere agri-exports? Or is it because India has a huge population to feed its agro-produce, limiting the contribution of agri-exports to a meager 2% of its GDP despite having the second highest global agricultural production in the world?

Figure 1: Comparison of Some of Top Agricultural Exporters’ Contribution to Domestic GDP

India’s agricultural trade performance will provide the answer.  India is the top tenth exporter of agricultural product in the world, as per WTO figures. Top exports comprise of sugar, beef, rice and shrimp. Export of principal agricultural products including rice, wheat, sugar, cotton, fruits and vegetables are ‘free’ (i.e. no quantitative restriction is  in place) whereas export of pulses (excluding chickpea) and edible vegetable oil in bulk (excluding coconut and rice bran oils) are ‘restricted’ to meet domestic demand. Since the economy opened up in 1991, India’s agricultural trade surplus reported more than ten-fold increase between 1991-92 and 2013-14. The brisk pace at which exports increased offset the corresponding increase in imports. However, in the last three years, agricultural exports fell by 22% while imports increased by 62% thereby resulting in a significant decline of trade surplus of 70%.

There is a need to analyse these figures in the light of the recently launched Agri-Export Policy 2018. For the first time since India’s independence the Executive has seriously deliberated upon enhancing agri-exports and come up with a policy for the same.

Despite producing the highest, and exporting nearly as much in value as many other countries, agriculture exports have seen a steep fall. We will have to look at the commodities being exported from India to solve the issue. India exports sugar to the world and has huge stocks of wheat with it but there is no international brand from India for biscuits, which require only sugar and wheat. Likewise, India exports shrimps to other countries, which in turn add value to them by processing it to international tastes, and earn several times more than India. Likewise, being a top exporter of beef doesn’t help – we have no setup or international brand which makes ready-to-eat processed beef using Indian spices and sauces, for international consumption. Sadly, this situation reminds us of the grievances of producers and consumers during the British Empire with raw textile crops and other materials.

The most commendable part of India’s export policy is that it has tried to find the solutions to the problem instead of dwelling much on the issues at stake. If implemented full-heartedly, there is no way that that India won’t achieve the Agri-Export target of US$ 60 billion by 2022.

With focus only on commodity export, stagnation in agri-export was bound to occur; something that Mr. Mohit Singla of TPCI had been stressing upon since some time.

In a welcome step, Union Commerce Minister Mr. Suresh Prabhu has announced that in accordance with the new Agri-Export Policy 2018, export restrictions on most organic and processed agricultural products will be removed; barring commodities other than those identified as essential from the food security perspective, such as onions. The idea is to assure that organic or processed agriculture products will not be under any export restrictions such as export duty, export bans and quota restrictions.

The agri-related exports from the country this year are expected to be worth around US$37 billion, which was US$ 7 billion more than that in the last fiscal. Considering that there was 20% growth in exports this year, achieving US$ 60 billion by 2022 seems possible. Mr. Prabhu has envisaged US$100 billion to be the export target in the next few years.

The Cabinet has also approved the proposal for establishing a monitoring framework at the Centre, the Ministry of Commerce being the nodal department and representation from various lined Ministries/Departments, Agencies and representatives of concerned State Governments, to oversee the implementation of the agriculture export policy.

The Ministry predicts total outlay for implementation of the policy to be 1400 crore, already existent under different schemes. Besides, the Centre would work closely with the State governments to help them make good use of the policy.

The policy seeks to diversify the country’s export basket and destinations, by boosting high value and value-added agricultural exports, including focus on perishables. This will change the focus from the current scenario as per which rice, meat and marine products account for more than 50 per cent of Indian agri-exports, though these commodities will continue to be exported.

The emphasis, as announced by the Union Minister, would also be given to promote the export of novel, indigenous, organic, ethnic, traditional and non-traditional agro products.

It is here that Indusfood assumes importance! Being promoted as the World Food Supermarket of India, Indusfood has witnessed great enthusiasm from leading importers of Agro F&B products. Leading supermarket chains, wholesale importers and Governmental buyers are coming to Indusfood where focus will be on organic, value-added or processed food that could cater to the international taste buds and has the potential to occupy shelf-space in international markets. The team here has vigorously searched for manufacturers of such products, albeit small, who do not have the resources to reach the global audience, but who have come out with innovative products. Attempt at Indusfood is to make our Agri-Export Policy more meaningful and enable the Government to achieve its objectives.

Another salient feature of the Agri-Export Policy 2018 is importance given to the following of cluster-based models and towards making efforts to attract private investments into production and processing. Why, for instance, should India’s shrimps be processed in a far-off country and exported from there at a much higher price when the same company can invest on the processing mechanism here in India? This will be a win-win situation for Indian export as well as for international investors.